Most people when they’re considering surgical treatment to eliminate their dependence on glasses only consider laser vision correction(LVC), either SMILE, LASIK, or PRK. However, with patients over 45 and sometimes younger, the procedure that provides better visual quality and a more permanent result is not LVC but rather Refractive Lens Exchange (RLE). 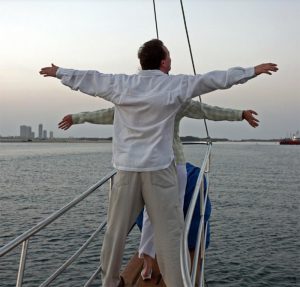 Fix the Problem Before It Starts

Your eye’s natural lens has started to become annoying enough to your vision that you now require glasses or bifocals. The idea of waiting until it is bad enough for your vision to be poor even with glasses doesn’t appeal to you. That’s why RLE exists.

The lens inside your eye is destined to become a cataract over time. It gets cloudier each year, noticeably so after age 50, and a cloudy lens is the same thing as a cataract. There is a window of time, however, where the lens is cloudy and dense enough to cause trouble, but not enough to be officially called a cataract.

The symptoms of this stage of dysfunction for your lens are uniform across all people who have:

RLE is the solution to these annoyances because it doesn’t require waiting until the lens has become so cloudy it impairs you.

RLE is the procedure whereby the natural lens in the eye is exchanged for an intraocular lens (IOL). This is the same operation that is done when a person has a cataract when their natural lens has become cloudy. By the age of 45, the natural lens has lost its ability to accommodate so that reading vision becomes difficult or impossible. Especially if a person is farsighted so that both their reading and distance is impaired, it quite often makes more sense to replace the natural lens with a better one, the IOL.

Tony is enjoying an active lifestyle – as if he was 25 years old again!

That wasn’t the case a year ago, when Tony 57, was still a slave to his eyeglasses. He used to have a pair of glasses in almost every room of her house. “I had glasses on my head, around my neck, and of course, prescription sunglasses,” he said. “I even had a bag just for glasses that I used to take with me when I traveled!”

Things had been that way for a long time. It was a frustrating lifestyle, and one that she was eager to change.

Lynda’s interest in vision correction was piqued by the Herzig Eye Institute ads on television. She did a little investigating, and decided to book a consultation to find out what options existed. When told she was a candidate for Refractive Lens Exchange, her answer was an emphatic “Go for it!”

The results have amazed her. “It’s as if someone turned on a light and I can see the way I used to.” And since her eyes’ natural lenses have been replaced, she no longer has to worry about developing cataracts. So impressive were the results that a month after Lynda’s surgery, her sister had the procedure too.

Lynda now has 20/20 vision. She’s able to knit, paint, play tennis and golf like she did in her youth – all without the hassle of glasses and contact lenses. “It’s become very real to me how we take our vision for granted.”

Now the only problem is deciding what to do with all her glasses.

Determining which option is best for any given patient requires a comprehensive eye examination and discussion with the surgeon to understand the pros and cons of each procedure. One size doesn’t fit all. It’s important to choose the right

How to Protect Your Eyes from a Pterigión or Carnosidad? Does RLE really prevent me from getting cataracts?
Scroll to top

Can’t make it to our office? No problem! Let our Doctors come to you!

Telehealth and telemedicine allow our doctors to communicate directly with you in the comfort of your own home with the help of telecommunication technologies. It allows long-distance patient and clinician contact, care and advice.
Click here to book your appointment and select “Telehealth”  REQUEST AN APPOINTMENT OR CONSULTATION